Local vehicle repair shop owners say that if Question 1 does not pass, it will mean significant restrictions on their services or even a slow death for their businesses.

Question 1 on the Massachusetts ballot this coming election would expand the current right-to-repair legislation passed in 2013, which gave independent vehicle repair facilities the same access as automakers and their dealerships to vehicle diagnostics. Since then, changes in technology have opened loopholes in the law and sparked efforts to amend it.

The question is what entities will have access to a vehicle’s telematics—data transmitted wirelessly from a car or truck’s internal computer system to a remote server, where it can be used to predict when a vehicle will require maintenance. Telematics has become prevalent in newer vehicles, and the data manufacturers collect has grown increasingly detailed.

Under current laws, only auto manufacturers have access to vehicle telematics, giving them an advantage over independent garages because they can use it to reach out to drivers before they even know they need service. The proposed law would give owners access to their vehicles’ data and allow them to authorize independent facilities to view the information. 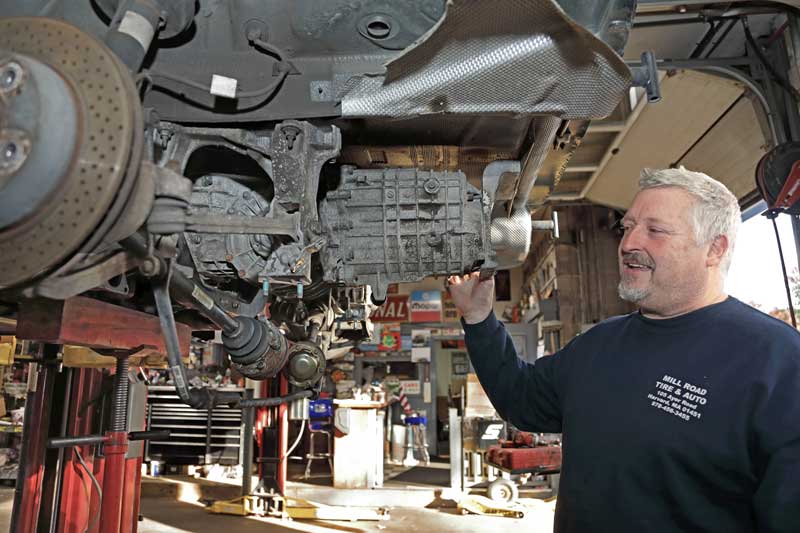 Steve Dodge of Mill Road Tire & Auto works on replacing the clutch in a Porsche. Dodge is one of many independent mechanics urging voters to vote “Yes” on Question 1. (Photo by Lisa Aciukewicz)

A “yes” vote supports the change, allowing greater access to vehicle data beginning with model year 2022. If Question 1 passes, the Legislature would have to amend existing law to implement its provisions. A “no” vote maintains current laws, which restrict access to telematics data, making it available only to auto manufacturers and their dealerships.

Ernie Pappas, owner of Central Avenue Auto Repair in Ayer, predicts that if the proposed law does not pass and independent repair shops are unable to access vehicles’ computers, businesses such as his will have the life squeezed out of them. In a phone interview with the Press, Pappas said that if the initiative were to fail, eventually his business “would probably starve.”

According to Pappas, under the current law, evolving vehicle technology will eventually restrict him and his mechanics from providing even some of the most basic maintenance and repairs. He speculated that if a customer brought in a car for an oil change, his mechanics would be able to change the oil, but not to turn off the maintenance light on the dashboard, and that other care would be limited as well. “Even, sometimes, just for simple things like repairing tires, we have to interface with the computer in a car. So most of the things that you can do to repair cars would be affected.”

Steve Dodge, owner of Mill Road Tire & Auto in Harvard, and Paul Seeley, owner of Seeley Automotive Services in Lunenburg, are also proponents of a “yes” vote. They both agree that if the law does not pass, their services will become more restricted as time goes on and telematics data becomes increasingly common in vehicles.

Seeley said the conflict is an issue of money, with manufacturers feeling entitled to information collected from technology they developed and funded. He echoed Pappas, explaining that if telematic information is withheld from independent garages, a lot of the services they currently offer will no longer be possible.

This is an issue that Seeley said his business has already begun to face. A customer will come to them for service, and when mechanics try to access the vehicle’s computer they find the information unavailable. In those cases, Seeley ends up referring the customer to the dealer for the repair. He sees a “no” vote as mutually harmful for both independent garages and consumers. “As a repair shop we have the potential for losing business, and as a consumer you will lose the choice of where to go.”

Cole Bailey, a Harvard resident and hobbyist mechanic, wrote in an email to the Press that he found the concerns of local garages to be legitimate. Bailey said hobbyists such as himself would be inconvenienced, forced to take their vehicles to a dealer for repairs they could have previously made themselves.

While the Press was unable to obtain comment from local dealerships, Gervais Ford in Ayer and Acton Toyota of Littleton, the counterargument is one of privacy protection. Proponents of a “no” vote say that independent dealers would still have access to the information necessary to make repairs. They say the revised law would mean all vehicle telematics would be stored in a communal cloud, and they claim such a system would be a magnet for hackers and could make drivers vulnerable to stalking, especially in situations of domestic violence.

In an Oct. 13 editorial endorsing the measure, The Boston Globe acknowledged that the ballot measure is not perfect and that cybersecurity concerns are valid. “That’s why, if the ballot measure is passed, the Legislature must follow up to better regulate telematics and ensure that all connections to vehicles are as safe and secure as possible,” the Globe wrote. (For more information about the data security issues raised by Question 1, go to Bostonglobe.com, “What’s the tech behind Question 1?” by its tech columnist Hiawatha Bray.)

In an official statement of opposition, Steve McElhinney of Coalition for Safe and Secure Data wrote, “Question 1 has nothing to do with fixing cars. Question 1 is a data grab by third parties who want to gather your personal vehicle information and access it remotely, including location data in real time.”