Horrell Capital Management Inc. lessened its stake in shares of Extreme Networks, Inc (NASDAQ:EXTR) by 84.6% during the third quarter, according to the company in its most recent filing with the Securities and Exchange Commission (SEC). The firm owned 50,000 shares of the technology company’s stock after selling 275,000 shares during the period. Horrell Capital Management Inc.’s holdings in Extreme Networks were worth $364,000 at the end of the most recent reporting period.

Extreme Networks (NASDAQ:EXTR) last issued its earnings results on Wednesday, October 30th. The technology company reported $0.08 EPS for the quarter, beating analysts’ consensus estimates of $0.03 by $0.05. The business had revenue of $255.51 million during the quarter, compared to analyst estimates of $253.26 million. Extreme Networks had a positive return on equity of 9.93% and a negative net margin of 5.39%. The firm’s revenue was up 6.5% compared to the same quarter last year. During the same period in the previous year, the company posted $0.08 EPS. On average, sell-side analysts expect that Extreme Networks, Inc will post 0.43 EPS for the current year.

In other Extreme Networks news, CRO Robert J. Gault sold 39,584 shares of the business’s stock in a transaction that occurred on Monday, September 16th. The stock was sold at an average price of $7.73, for a total transaction of $305,984.32. Following the completion of the sale, the executive now directly owns 294,797 shares of the company’s stock, valued at approximately $2,278,780.81. The sale was disclosed in a filing with the Securities & Exchange Commission, which is accessible through the SEC website. Insiders own 2.62% of the company’s stock. 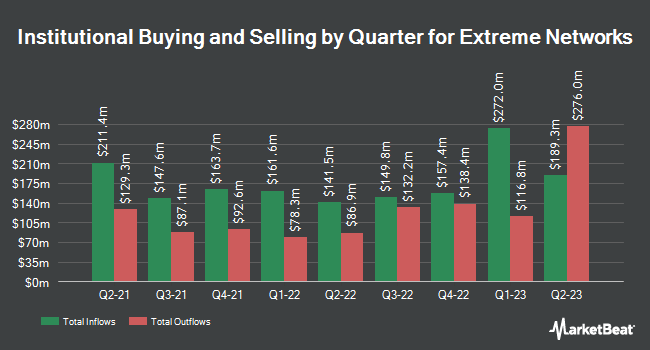