Citrix Systems, Inc. (NASDAQ:CTXS) with its digital workspace and networking solutions has benefited by providing a platform for the ongoing adoption by companies across industries for cloud-based systems through its leading virtualization software. A trend of firming profitability has come despite more stagnant growth in recent years with the company challenged to evolve with the changing landscape of tech. The company just reported its latest earnings, which beat expectations and set a positive outlook by management. This article takes a look at the results and our view on where the stock is headed next.

Citrix reported its fiscal Q3 earnings on October 24th highlighted by a big EPS beat at $1.52, $0.27 ahead of expectations for the non-GAAP headline measure. GAAP EPS of $2.04 also came in well ahead of estimates of $1.35. The spread between the GAAP and non-GAAP measure is related to a change in Switzerland’s tax policy that for the company resulted in a one-time benefit of $158 million. Revenues of $732.9 million this quarter were essentially flat year over year, but exceeded management’s prior guidance in a range between $700 and $720 million, largely explaining the better-than-expected earnings.

The key story here is an ongoing transition towards a subscription model across the core segments which the company explains creates a near-term revenue headwind, evident by the flat y/y sales figure in Q3, but ramps up over time resulting in higher margins and profitability. This quarter, the higher subscription mix impacted reported revenue growth by 700-800 basis points according to the press release, highlighting what is a transitional period for Citrix. 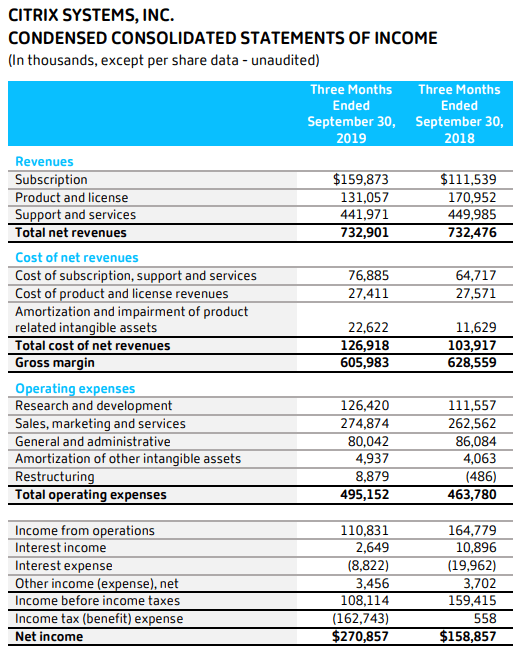 On the quarter, “subscriptions” revenue increased by 43%, while the traditional “product licenses” declined by 23%, but by a nearly offsetting dollar figure. The graphic below shows that with new the subscription model, there is a gap of 2.7 years until break-even compared to the traditional perpetual license model in the workspace segment and 3.5 years for the networking business. Over time, however, forecast revenues grow on average 35% higher, and this dynamic has become the basis for the bullish sentiment and positive outlook for the stock. 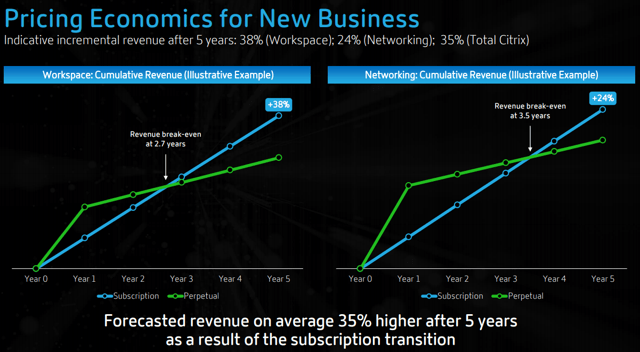 The message from management is to look beyond the current “weak” revenue growth, as it lays a path to accelerate to a higher upside in the near future. Management expects 2020 to be the “trough year” for operating margins with a view that the near-term pressures will ultimately make way for a structurally more profitable company.

Compared to 2016 when subscriptions represented just 9% of total revenues, that number has grown to 21% year to date and gaining fast traction across product bookings, now representing 72% of the workspace business. The company shared long targets where it sees subscriptions reaching 50-60% of total revenues by 2020 and 85-90% of total product booking by 2022. The company is focusing on the annual recurring revenue between “SaaS” and subscription as an indicator of the trajectory of its business which is up 40% year over year to $672 million while booking future committed revenue of $2.18 billion, up 13% from Q3 2018.

The result is an outlook for higher free cash flow based on a higher operating margin over the next five years while noting that the current transition weakness should continue through 2020. Going forward, the company wants to focus on its annualized recurring revenue, “ARR,” metric for subscriptions and SaaS revenue which each reached $672 million and $463 million respectively, up from $481 and $305 in Q3 2018. The idea is that as the existing license contracts expire, existing customers will eventually renew into the subscription or SaaS model. New customers are joining with new subscriptions. 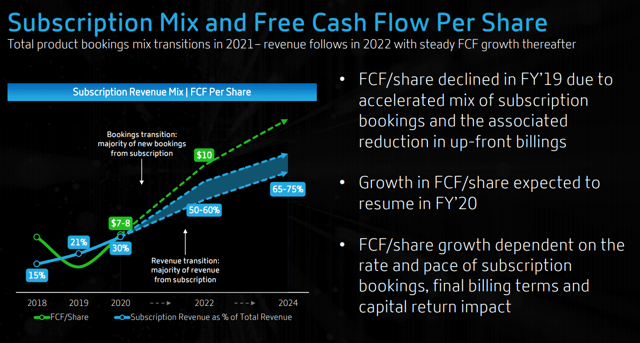 The other development this quarter was an increase in the authorized share repurchase program by $600 million to a total of $1 billion. Last year the company initiated its first ever dividend with a quarterly payment of $0.35, which yields 1.35%.

Along with the earnings and revenue beat this quarter, Citrix raised the full-year guidance to non-GAAP EPS between $5.60 and $5.70 from a prior range of $5.35 to $5.60. Full-year revenue at $3.0 billion if confirmed would represent an increase of about 1% compared to 2018. Preliminary guidance for 2020 is targeting revenue growth between 3% and 4%, again impacted by the ongoing transition dynamics. 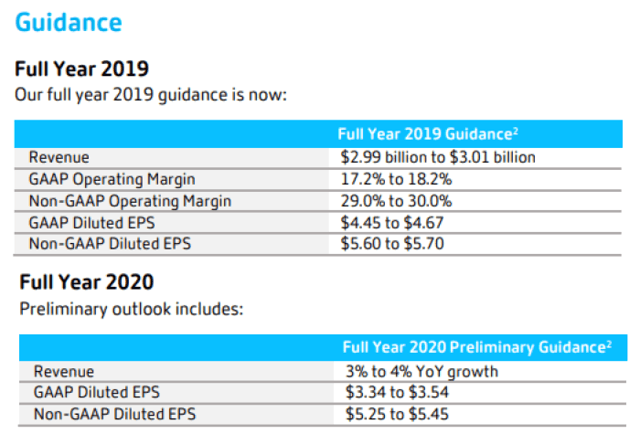 The move by Citrix towards subscriptions and SaaS has been known for some time, but what the results this quarter showed was that the proverbial “near-term pain” wasn’t as bad as previously expected. Along with higher-than-expected revenues and the earnings, management has laid out a solid road map for investors to follow over the coming years and what to expect. Of course, beyond the metrics and financial statement gymnastics, the underlying organic growth remains the key driver and ultimately that’s what the market will be focused on.

CTXS surged by nearly 4% on the results with the market clearly bullish on the revised guidance higher for the year and overall positive comments by management. The stock now trading at $107.50 is up an impressive 20% from the 2019 low at $90 back in August, but still 6% away from its all-time high from 2018. Naturally, we think that $115 could be a near-term target given the current momentum, but I want to stress there are reasons to temper expectations particularly for investors who missed out on this latest spike.

Our concern here is that much of the enthusiasm is based on the three- to five-year roadmap for the transitional period which will likely involve a number of execution risks by management. If the market is already buying into these 2024 operating margin targets, we question how the company will be able to significantly exceed expectations that are presumably priced in here at the current level.

In terms of multiples, CTXS is trading at a relatively reasonable valuation considering a forward P/E at 20x and price to free cash flow of 18x. On the other hand, expectations of revenue growth in the 3% to 4% for next year are hardly impressive leaving aside the…